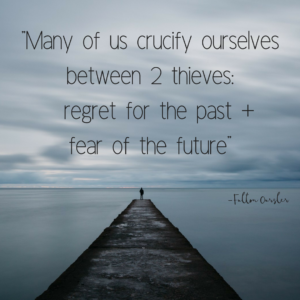 My favorite yoga instructor recently introduced me to this quote and I was really struck by the concept of the “2 thieves” as they’ve been vying for my peace of mind for the past few weeks. I’m pretty adept at being conscious of my thoughts, how they are supporting my greater good (or how they are sabotaging it) but when stress ramps up, over-analyzation comes calling. It waltzes in the backdoor with a grin: “Hey remember me? If you just sit and think and analyze and beat this to an over-intellectualized pulp you will FIGURE it all out.”

I am a recovering over-analyzer, but the truth is, I LOVE it.

It’s familiar + comfortable and I’m REALLY good at it. And I used to think it was helpful as I sold myself a bill of goods that when I over-analyze I’m responsibly controlling the situation because I’m “doing something”. I’m looking at all the angles, playing out all possible outcomes, preparing for all potential future scenarios. I’m being productive. I WILL thank me later.

But I’m never thankful later. Regular old run of the mill analysis? We couldn’t function without it (nor should we try) but over-analysis is a trap. A thief. This worrying, regretting and perseveration is a LOT of pain for very little gain. Think about a time when you were really pre-occuppied with a past event or one coming down the pipeline. Did you feel better after you thought about it to no end? Relieved? Did you experience peace of mind? Better yet – did you come up with THE answer?

How many times do you forsee the worst happening, stress out about it, lose sleep and then that thing? That awful thing? It.Doesn’t.Even.Happen?

Getting worked up about something that hasn’t happened yet is literally the most colossal waste of energy + time. A scenario isn’t anything until it’s something. Don’t make nothing into something and then stress out about it.

I mean – you can but the alternative is much more relaxing + enjoyable.

So what is the alternative? How do you stop that thief?: Present moment awareness. It’s become SUCH a trendy concept – but there’s a reason for that. It’s literally everything. In the present moment there is nothing wrong (unless you are careening off a cliff right NOW). Think about it – as you read this is there ACTUALLY anything wrong in THIS moment? No, and there usually isn’t – but our minds lead us to believe otherwise. I used to combat these distracting, negative thoughts with brute force: I would WILL myself to stop thinking such things – which in hindsight is hilarious.

You can’t think about not thinking.

I’ve found when you want to stop a behavior or a thought, the most effective approach is to redirect your attention and energy elsewhere – focus on something else instead of trying to NOT focus on THE thing. Give the brain something else to chew on. And this is hard – especially “in the beginning” because as you’ll notice the brain will quickly swoop back in and begin perseverating again. Because it’s the default operating system we’ve been running on and it’s systemically engrained because most of us spend a LOT of time focused on past regrets and future worries.

So if willing ourselves out of these cyclical + debilitating thought processes doesn’t work – what does? My best suggestion? Get out of your head and into your body. Move, breathe, distract your brain + connect with yourself, with others who “get you”, get outside, do what makes you feel most alive. My personal favs? Running, hiking, yoga, singing, dancing, biking, meditation, coloring, connecting with people who make me feel “the most me”.

With few exceptions, your body is always in the present moment – so access it’s wisdom and bypass the domineering nature of the mind that pulls you into the past or sends you careening into future: neither place you have any control over, anyhow.

What do you do to make time feel like it’s suspended? When the voice inside your head is seemingly taking a time out? When the here and now feels like exactly where you are supposed to be? Nothing pulling you forward or backward? What are you doing? Who are you with?

Those things = do more of those things with those people that make you feel the way you want to and watch the over-analyzing thief of the present moment run for the hills and the calm + peace of being in the here and now settle in.

BACK TO ALL POSTS
← What is Coaching? Operating System →
SHARE NOW!